This recipe for apple dumplings is almost too good—and too easy—to be true. The homemade pastry dough is simple enough that you don’t need to go to the store for pie shells. Serve it with some ice cream and a nice cold glass of milk, and save the recipe to use again for special occasions. Wouldn’t these baked apple dumplings go great with your Thanksgiving or Christmas holiday spread? Who doesn’t love a simple dessert? Sometimes the easiest recipes are the ones that linger in the back of everyone’s minds. When I made these baked apple dumplings, I was honestly looking for something I could whip up quickly without any trouble. When everyone kept asking me for the recipe, I knew I had a winner.

The recipe is so easy—just core your apples, place them on a crust, fill the cored apple with brown sugar, cinnamon, and a little butter, wrap them up, and place them in a baking dish. See what I mean?

This dish is perfect for entertaining, just serve with a little bit of ice cream. It’s a warm dessert that really takes no time at all. You can get pie crusts from the grocery store or make them yourself a day ahead.

I remember pulling crab apples off the tree next to my cousin’s trampoline, way out in the country. I was a city girl growing up, so getting to pick apples right off the tree seemed so quaint and cool to me. When I would bite into them, they’d be super tart, of course. But I didn’t care so much, and outwardly I would act as if they were my favorite apples ever. These days, I grow several of my own apple varieties, and biting into a fresh apple from my garden tastes just like I imagined it would as a young girl. My favorites are the firm apples, like Granny Smiths or Honeycrisps. They bake beautifully, so they’re perfect for this apple dumpling recipe! 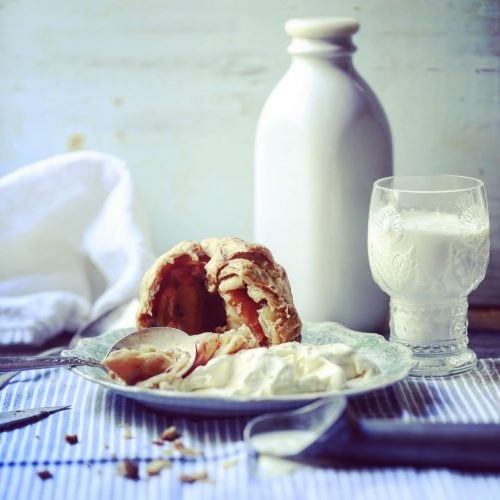 These apple dumplings are almost too good—and too easy—to be true. The homemade pastry dough is simple enough that you don't need to go to the store for pie shells.
5 from 1 vote
Print Recipe Pin Recipe
Course Dessert
Cuisine American