On Brothers and Sisters

On Brothers and Sisters

I have been trying to write this post now for two weeks, but motherly responsibilities have kept me from it. I hope that this post helps to promote peace in your homes. As parents, we all want our children to love one another, be patient with one another, ignore irritating behavior, and to be continually kind-hearted and caring for one another. This habit is not the norm in today’s families and must be worked on daily. 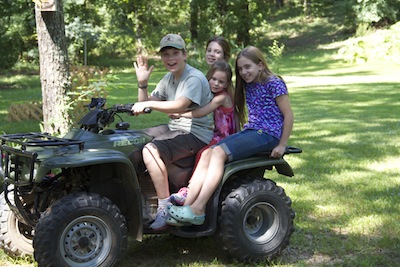 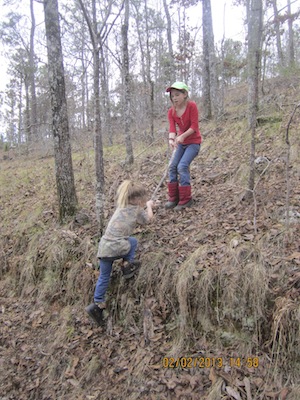 I grew up as an only child (I do have a half-brother and sister whom I adore, but did not grow up in the same household with them) and sibling love and rivalry is a very interesting topic to me. It has amazed me how my seven children all know one another so well that they pick out the best gifts for one another, know what irritates each one best, know just the right or wrong words to say to one another, are best friends, and sometimes the worst of enemies (usually very short-lived).

Our home is a fantastic microcosm (I learned that word in high-school in a very embarrassing way – that is for another post) of the world. There could not be so many different personalities in one household than in this one. Home is the perfect place to learn to love those that are different from you and to love the sometimes unloveable, how to give when you do not FEEL like it, how to “let things go” and how to pick ones fights. These lessons truly would have been great for me had I had brothers and sisters.

As a mom, I have been taking notes for 19 years when some “problem” comes up with my children. I am usually brought to my pen and paper by an overwhelming sense that something must be done about a behavior and nothing that I have tried is working. How many of you can relate to that?!? Am I the only one…sometimes I feel like I am. I have been journaling what I tried to do, what didn’t work, and then eventually what worked.

I have recently been experimenting with one particular topic – teaching brothers and sisters to love one another with “brotherly affection” which, to me, means outward behavior, not just feelings. This is extremely important for the peace of the home as well as the witness of our families to others (You are known by your love for one another). People know when family love is fake. This must be real. 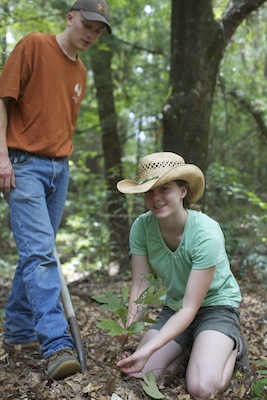 Brother and Sister working on a project together

I have to say, that parents are given the huge responsibility to teach our children everything we know. I believe that God gives us everything we need to know to raise the children that he gives to us. I do not think that he gives other people the answers always to how we should raise our kids; I think God gives the parents the answers. He may use others to help us or enlighten us. As we come upon any problems, if we ask for wisdom, God is generous to give it to us, if we ask in faith (James 1: 5-7).

I have from time to time had different pairs of kids clash in personalities. They would tell you that they loved one another, and they would play often together, but would often be at odds due to personality conflicts. As of late, I have had a “command man” trying to command one of his younger sisters to do good things like “pick up your shoes and take them to your room” or “clean up what you mess up”, but the younger sister was not apt to obey his GENERAL LIKE commands (I wouldn’t want to either). 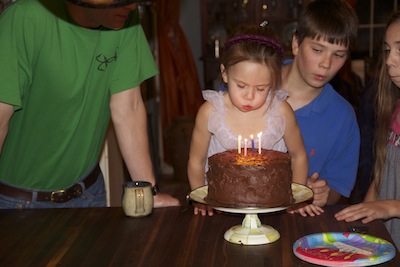 The entire family genuinely loves to see the excitement of the birthday person enjoying their special day!

I tried talking to the GENERAL about his tone and tried to teach him the benefits of leading by example and I shared with the sister about doing what was right despite how and who told her to do it. I tried other things as well TO NO AVAIL. I REALIZED THAT THESE ACTIONS ON MY PART WERE NOT facilitating good relationship between the two of them, just a tolerance of one another with anger building up between the two of them. How was I going to lead them in truly loving one another. That was the only real way to stop these conflicts.

I prayed and prayed. Finally, a thought came to mind. I am not one who feels loved by gifts being given to me, but some children are. The younger sister is one that feels loved by gifts. I had the older son go with me to Office Depot and pick out seven gifts to give his sister. I bought the gifts, but let him give them to her. He also had to pick out wrapping paper and notecards to write a special note with each gift for seven days. He had a blast picking out the gifts because he loves his sister. He was now going to get to SHOW it. He picked out pencils, erasers, pads, pencil boxes, folders, etc. 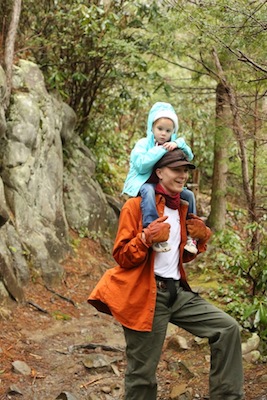 Big brother lending a helping shoulder for the team on our 6 mile hike!

The sister did not mention it to me at all the first day. She did show her sisters and talk about her fuzzy pencil. She carried it all through the house. I found the first notecard that said, “I love you very much.” She came to me the second day asking, “Mom, do you think that you could take me to buy something for …” I said that I thought that would be a great idea. Every day for a week she asked me the same question. They did not have any tension for that week at all. The brother has given her more things even after his seven days are over. It has been three weeks now and they are responding mostly with gentleness towards one another.

Another beautiful example of this brother truly taking the ownership of loving his sister is that I offered him a set of rings to give his sister for her birthday next week. He looked at them and handed them back to me and said that he had something else in mind and wanted to use his own money. 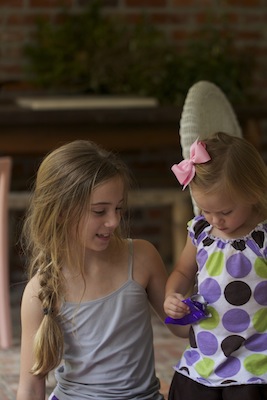 Through much prayer and thought and time, God is good to guide those with children. Friendships between brothers and sisters must not go neglected. These are life-long relationships which can be stronger than any other. All selfishness needs to be tended quickly and we as parents can see it more quickly that our children. These are tender relationships.

I am not saying at all that this is the answer to your kid’s conflicts, but I am saying that there are answers. Only you know what makes your kids tick. If you dont, then find that out and you will be way ahead of the game.

You may have to wait for years, but God will lead day by day and obeying Him as He shows us is all that we are expected to do. They may not come quickly to you, but they will come in the right timing for your situation. Pray, wait, seek…and you will find.

10 responses to “On Brothers and Sisters”