Party in the Pasture? 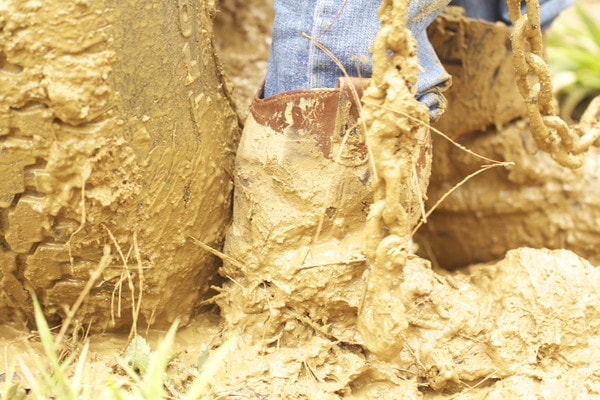 My day began just like any other Wednesday. Planning the day, checking my calendar, school with the kids, answering emails, making lunch and looking around at all the loose ends left undone and wondering how it will ever get done.  They boys left to go check traps in that it was the last day of trapping season.  I get a call, “Mom, Hey….”.  I said, “What’s goin’ on?”.  The reply:  “WE ARE STUCK”.  I called Scott and he went to pull them out of all their troubles.

…A few hours later I get a call “Can you come pick us up and bring some boards with you?”. I could not believe both of our trucks now were stuck.  By the time we got the boards together, which we ended up not taking, and the rest of the kids in the car and a little food for the boys it was 9:00 p.m.

The next morning Hunter, my oldest son, had to drop Scott off at work while he then went to meet a wrecker service at the property.  I told the service that they may get stuck and the attendant (hereafter referred to as “Willie”) laughed and said, “That will never happen!”  Willie, a tall lanky “country boy” wearing his brand new white shoes and his co-worker (“Billie”) greeted my sons at the gate.  Excitedly the wrecker boys followed my boys to the muddy scene.  Two hours later, I received a phone call; “The wreckers are stuck, but they have a BIG wrecker on the way!”  Two hours later, I received another phone call; “The BIG wrecker is stuck, but they are sending for more help.”  Oh, that’s a relief! 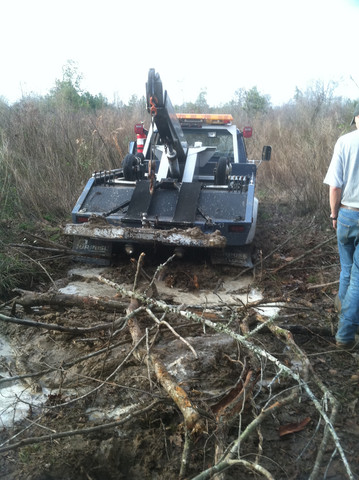 In that we had no other vehicles that were available, Scott’s parents had to pick him up from work and take him to the happenin’ destination.  When he arrived, another truck and a tractor were being unloaded at the gate.  By the way, the site of the stuckness (is that a word?) is over a half mile into the property.  By this time there were at least 3 other pick ups loaded with girlfriends, friends, parents, and friends of friends overlooking the lights of the wreckers and the spotlights from the trucks in that it was getting very dark and very late.  There were about 19 people on the scene not including my family.  You know you are in trouble when you hear the owner of the wrecker service say to Willie, Billie, and the other help, “We gotta get them out; we have every wrecker we own out here!”

Willie wanted food and that was evident every, lets say, 30 seconds.  Billie’s brother only wanted a drink.  He went to the creek and noted that “that’s some good “crick” water;  it tastes just like faucet water!”  I like that kind of optimism.  It turned out to be quite an entertaining night.

Back on the home front, I was filming for an outdoor television show at my home the next morning.  I had no vehicle to get any groceries for the cooking segment and the night was quickly coming to an end.  I asked a friend to help me buy the ingredient and thankfully she was available and all was well.

Just before midnight all the trucks were free.  It was a bittersweet moment to see hungry, hardworking Willie walking with three pounds of mud covering each shoe in the moonlight back to his free wrecker and supported by all the cheers from family and friends.  I sure am thankful for all the hardworking boys not giving up.  What a night to remember!